The plan for a good night’s sleep on Thursday (to help me get through work and the drive up to Cantaloupe’s on Friday) backfired when the Cat decided at 3.30am we weren’t paying her enough attention and leapt over me onto the (fortunately laminate) floor to vomit everywhere.

I got through the day at work and pedalled home to feed the puke-alicious puss before packing – something I probably should have done the night before but, y’know, laziness. Exiles shirts, pyjamas, underwear, book, teddy, toothbrush. Figured it’s going to be hot at hotel so shorts and battleskirt would be in order and full battledress meant hasty leg-shaving. Swimming costume to complete the set – we’d packed the models and pitches and dice and all the important bits beforehand – and we’re ready to go!

Drove up to the lovely Cantaloupe’s and crashed the night to break the journey into stages. Road works the following morning meant we thought we were going to be running late, but we’d all pre-registered so it was ok.

I wasn’t sure what team to take; all I knew was I wanted to take something fun. At Crumb Bowl, Nazgob convinced me to join the Halfling Challenge. Very glad I did! Out of 160 coaches, I believe 15 took halflings in the end and I have shiny new dice and a badge so am very happy.

My team, ‘FlingTastic’, had 2 trees, 9 halflings, Deeproot, Puggy (or at least, a Motty Mottison model pretending to be Puggy), a chef, a babe and no re-rolls. Skill-wise, day 1 was guard on a tree, side step and sure feet on ‘flings; day 2 was block on a tree and another set of side step/sure feet ‘flings. 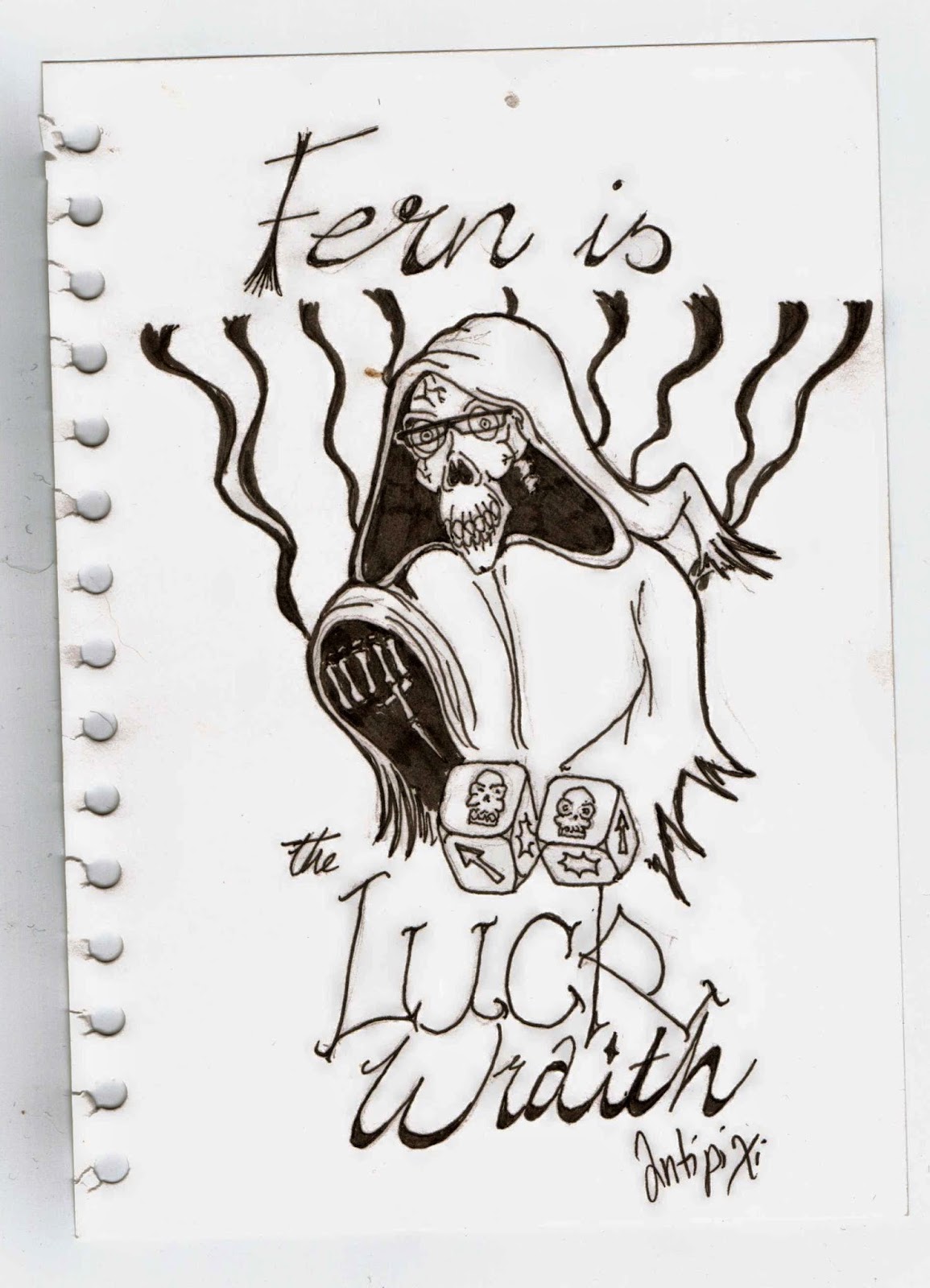 Game One – vs AntiPixi and NoB lock

Halflings vs Chaos Pact sounded an interesting match to me. My chef exceeded himself, stealing all the re-rolls for the match and, to rub it in, my ‘flings were so well behaved I didn’t use them all.This earned me the nickname ‘Luck Wraith’ and my very favourite Blood Bowl souvenir, this fantastic picture from AntiPixi.

My first attempt at a one turn touchdown nearly backfired  when the fling was a square short even with go for its, but fortunately the rats couldn't keep the ball and after a lot of fuss and bother, Puggy eventually managed to score on turn 8 of the first half. It was then up to the flings to keep the pact from crossing the line in the second half – and a very good job of it they made too.

The match ended 1-0 on TD’s and 1-1 on CAS, and I can credit that entirely to my fantastic chef and Antipixi's terrible dice.

Game Two – vs Pippy and Going for the 24

I don’t think I’ve ever faced Pippy before, so this was a new experience. He was using lizards, a team I don’t see very often. The weather was rolled to reveal (in juxtaposition to the glorious weather outside) pouring rain.

Stunty teams do not like the rain. Fortunately, rolling five consecutive 3’s in their attempts to pick up the ball did not dampen the little guys’ enthusiasm; the lizards were kind enough not to take complete advantage of this oversight and allowed the ‘flings to retain some dignity and they did manage to kill the Kroxigor.

Final score, 0-2 TD and 1-1 CAS. Pippy is a much better player than me and definitely deserved the win. I have no doubt he could have beaten me by a much higher margin, but I think I could have made a better showing of myself if it wasn’t for the rain…

Game Three – vs Nazgob and the Marienburg Fireflies

Naz and I go to a lot of the same tournaments, but I think this is the first time we’ve actually faced each other (he's usually much higher up the tables than me, but that win against Antipixi did me good). We settled down for some manic ‘fling on ‘fling action with nearly identical teams (with break tackle rather than guard on the tree, he’d also taken both side stepping flings on day one and support staff rather than a babe). His first game, Puggy had behaved abysmally and been fired so he was now fielding Bertrand Hairfoot (who happens to have the same stats as Puggy…) so it made sense for Motty to reveal himself.

Weather played up again – a blizzard this time. Neither set of flings was particularly worried – trees can only throw a fling so far anyway!

It seemed likely that whoever could take down trees first would be in a good position to win, so having knocked down the Deeproot clone playing for the Marienburg Fireflies as well as one of the Silverbark brothers, but despite 6 assists and easy armour cracks, 4 members of Flingtastic were forced from the pitch with nothing more than stuns to show for it.

Final score 1-3 on TD, 2-1 on CAS. Another very enjoyable and silly game J

Then retiring to the bar for other games – check ‘em out here – and also a few issues with the hotel (but that’s another story).

Game Four – vs scs.sam and The Deformed Stumpy Ninjas

I’ve played Sam before, but never using ‘flings and never against his Chaos Dwarfs. I was a bit concerned – not much sleep and a team with high armour and a fair amount of tackle didn’t sound much fun. However, the game was very enjoyable even if not a single throw team mate landed successfully.

A quick shout needs to go to Nazgob, Bertrand and the Marienburg Fireflies at this point: during kick-off in this round, the ball landed on a tree (the one with block rather than the one with break tackle) who caught it and then walked down the pitch to score – needing 4 turns, 7 go for its and killing 2 elves!

Crystal’s wood elves were not having a very good tournament – Pug’s ‘flings had rather torn them to pieces in their previous game so they were feeling understandably nervous at facing more short guys. It did look like their bad luck would continue but, after the first few turns, they managed to pull themselves together and ran rings around the flings. It didn’t help that Fling Tastic’s chef had forgotten his seasonings for this game and only managed to secure one re-roll for the flings.

Final score: 0-3 TD and 1-3 CAS but again a lot of fun. I also need to nominate Crystal for the best hair in Blood Bowl.

The humans hadn’t been doing very well and were a little frustrated to find themselves at the bottom tables. The game was slower paced than I’m used to – Exiles play fast, and I think most of the people I normally play do too – and my only game of the weekend that came even close to being called (and very nearly was…). I’m used to being among the first to finish!

As an Exile, I’m very pleased that our very own ceetee managed to make it as League Champion (the highest placed person outside of the two players in the final itself). Also, Nazgob won the Halfling Challenge and got to wear the Stunty Cape during round. I didn’t know any of the other winners.

Taking a chef instead of re-rolls was definitely the way forward: denying my opponent theirs was far more valuable than having my own. I could see the benefit of Naz’s option of fan factor/cheerleaders etc to ensure winning fan-based kick off results, but for me the babe was invaluable by helping keep players on the pitch.

I didn’t take a team intending to win any games and as a result had one of the most enjoyable tournaments I’ve had in a while. Meeting so many lovely new people, facing so many new opponents and not being so badly outnumbered on gender also helped (it shouldn’t matter, but I love it when there’s a few other women around): I had an amazing weekend.

The drive home was tiring but we were welcomed by a very purry Pusscat and that was lovely too.
Posted by Fern Kali at 19:55