Shan Fan was busy: I'd forgotten how busy a big city can be, and Shan Fan must be one of the busiest. Taking a deep breath as we worked through the crowds, I discovered Carson could also speak a little Chinese, so the other two would be relying on us. We'd need to find somewhere to stay while we sought out Pennington-Smythe and the Explorer's Society, but Captain Kim had been impressed enough with us to pay us some extra on top of our board for the journey up, so we could afford a bed at least.

But first, food! We headed for a noodle bar, where some men in red sashes (some kind of Tong symbol? Carson wasn't sure of the exact significance either, and the other 2 hadn't a clue) suggested we talk to 'Willie Long Tam'. Should be able to find him in the 'Red Lantern' in the Skids part of town.

We didn't see much of Shan Fan as we went. Passed the heavily guarded Heavenly Park, through Stinktown, which gets its name from the abbattoir and the stench of dead animal. Then into the Skids, about the poorest, most decrepit place I've ever been. The Red Lantern looks like its about to collapse, despite being the least rundown building. Steve stood outside with his darn horse.

Willie turned out to be the barman, and (as barmen often do) had gossip to share. The Explorer's Society had fallen foul of the Hseih Chia Jen - Shan Fan's law Triads: "Family of Deliverance" - and have been pretty much destroyed. He didn't know exactly where the Lodge had been, just somewhere north of town, and suggested we speak to Wong Chau Sang, better known as 'Long Haired Tony' and nominally the Marshall of Shan Fan. We should find him in the Sheriff's Office in Tael Town.

We headed over there, and again Steve chose to stay outside. He seemed mighty jumpy about that horse - we'd not seen another, so it wasn't like there was any evidence of a market for horse thieves.

Long Haired Tony spoke perfect English, which was a relief as Carson and I were both fiinding our pidgin Chinese stretched to its limits. He said most of the Explorers had hightailed it before the fire that took out the lodge, but he thought some might be living in Sunrise House and was able to give us vague directions there and to the ashes of the Lodge. It took some persuading to get any more out of him, but he eventually muttered they'd likely "suffered a loose match from an angry Triad" - likely had something the Triad wanted they weren't prepared to give.

As we headed to Sunrise House, Steve pointed out 4 men who'd been following us since the docks, hungry-looking: this was Steve's fear for his horse. About halfway to the House, Carson noticed that 2 of them weren't tailing us any more. We tried to look around for them without drawing attention to the fact we'd noticed them gone, but what we found was that they were ahead of us, and the streets were clearing ready for some violence. My stomach clenched. The guys took two down quickly enough, though the third managed to get a good hit in on Steve, leaving him momentarily winded. After landing the blow, he leapt to the top of a nearby building to escape. A single bound! The last fell to his knees and Carson murdered him. The crowd surged back in as though nothing had happened. No one seemed to care that people had died. I looked at Carson in horror. He shrugged and said he had to do it to make a point: they were after the horse and now people will know we're not to be messed with. It doesn't so sit easy with me, to glibly break the Lord's Commandments. But they were after the horse, and it was still garnering attention so we hustled on.

Sunrise House towered over its surrounding buildings. Tesla opted to stay with Steve and his horse this time, so Carson and I entered together. There were a few white American men, armed and standing guard around the place. They didn't pay us any mind as we headed to the receptionist. She claimed not to know Pennington-Smythe's name, but the guards looked up and said they could take us to some guy called Dillenger. They lead us upstairs to where more armed white men stood guard outside a suite of rooms.

Rutherford Ellington Dillenger: elderly, very dapper, very British. He knows O'Malley, and when he heard why we were there explained this Chapter of the Explorer's Society has closed: it was only him and Captain Pennington-Smythe left, and the Captain'd been taken. The Triad were after the "Amulet of Rahashimir", a dark and evil thing from the Arabian deserts, claimed to be able to bring people back from the dead - but only those with the blackest heart would use it. The Triad wanted to use it to raise something from the depths of Hell... It can't be destroyed (or at least, they can't find a way), so Pennington-Smythe was going to hide it, and he hadn't come back.

Carson handed over the German wizard's book we'd found in Fellheimmer's Folly, hoping it could be translated.
Posted by Fern Kali at 21:46 No comments:

If I were a Blood Bowl character...

Yesterday was the annual Bubba Bowl Blood Bowl tournament in Bristol. I didn't make it, but wanted to play with this year's concept: bring yourself as a player!

The idea was to take a normal character from the team you were bringing, then spend to raise the players value up to 150k, based on you.

Husbit took Undead and designed himself as a caffeine-addicted zombie. To replicate the caffiene-high, the zombie has 2 movement increases and Jump Up, and 'Needs Coffee' (a flavour-reskin of 'Really Stupid'), as well as both Dirty Player and Sneaky Git. He had great time and ended 9th out of 32, which he was pleased with.

I've been trying to think about what I'd do. A quick check shows a regular skill adds 20k, a double skill 30k and a stat increase 40k. My first thought was a Wood Elf Wardancer, with my aerial acrobatics, but they start at 120k and I wasn't sure what 1 skill I'd want to add. 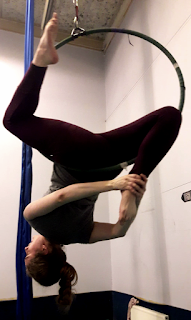 Dark Elves also looked fun, but I couldn't decide between a Witch Elf and an Assassin so moved onto Elves (what will be 'Elf Union' with the new GW release and currently often colloquially known as 'Pro Elves'). I really can't run (if my knees don't go, my hips will: yay for hypermobility!) so ruled out the catchers, and while I'm not bad at catching and throwing (I used to be a demon fielder when we played rounders and cricket at school, though I couldn't hit the ball), I figured I'd go with a blitzer rather than a thrower. They come with stat line move 7, strength 3, agility 4, armour 8 and skills block and side step at a cost of 110k. I added dodge and jump up to reach the full 150. I kinda like that, but when it comes to Blood Bowl teams, my true love lies with the Halflings.

And halflings, with their little legs, work really well for my inability to run. Their basic stats are: move 5, strength 2, agility 3, armour 6, skills right stuff, stunty and dodge at a cost of 30k.

I'm stronger than that, so first thing is a strength increase, then to reflect the acrobatics I added jump up and side step - and a skill I'm calling 'innocent smile' but which is really 'sneaky git'. I learnt very early in life that if you smile and look innocent, you can get away with a lot, so I figure that's a great way of getting the ref to not realise you actually kicked the guy lying at your feet...

What about you? What would you look like as a Blood Bowl player?
Posted by Fern Kali at 19:03 2 comments: