Bubba Bowl 2016. Over a week ago now. Need to get back into the habit of writing these up sooner. At least I have notes, albeit minimal - and I did take some photos!

There were plenty of new people there, and many more I've only seen maybe once or twice before and, whilst I love seeing my friends, it's always great to meet new members of the community.

There was a 'High Elf' challenge being undertaken by members of the Bubba League because (at least in our local tournament circuit) they're rarely seen as a team. So they got a ridiculous glittery baton and a crown, and the highest placed High Elf at the start of each round had to wear/hold this for their next round, with it being awarded to the highest placed High Elf coach at the end of the day. I was unaware of this, and took Strictly Come Wardancing (the Wood Elf line up that saw me to second place at Cake in 2014) because Husbit wanted to take Halflings. Bubba has higher points available but fewer skills, so I bought an actual reroll (and felt dirty), meaning I didn't need to take leader. No doubles skills allowed unless you're stunty, so I took tackle instead of guard on one wardancer, and strip ball as usual on the other, leaving two line elves to pick up dodge.

Game 1, vs Cornish with Goblins
Exciting match up for me; less exciting for him, and exarcebated by the fact that I'm a much more experienced player than he. Oh, and 2 blitzes falling in my favour, with a dead chainsaw after the first... He did, at least, win fame and kick off, but it didn't help him much. Even with Jordell KO'd for most of the first half, I managed to get the ball off him and score leaving him one turn to equalise. I'd also, by luck rather than judgement, got him down to 11 players so, whilst his fanatic succeeded in using his only bribe, it had to play and wouldn't be on the pitch for the second half.


One of his trolls choosing a crucial moment to double skull helped, as did my line elf managing to pick up a ball in 4 tackle zones...

As I said, he was an inexperienced player and that definitely helped me. He'd started the game mentioning he was worried he'd forget he'd given the fanatic grab and that the trolls, with really stupid, needed babysitters, so I did my best to remember to remind him, and the highlight of the game, for me, was actually that he didn't hate the game despite it being very one-sided. We played more slowly than I'm used to, but this didn't make me tetchy like it can because he used that time to be social and friendly, and he noticed me trying to make the game fun for him even as I thrashed him, and thanked me for it, and that really made my day.

Final score: TD 4-0, CAS 2-3 (although the crowd and a failed dodge killed another 2 of his goblins).

Game 2, vs Nightwing with High Elves
He'd taken Eldril Sidewinder and Soaren Hightower: I've faced Eldril before so gunned for him, even risking sending off as I fouled him with line elves, and the crowd were on my side as they ripped him to pieces for me. In response, he fouled Jordell to death at the end of the first half, which ended 2-0 to me after a bit of bad luck prevented my third TD (and left Jordell on the floor for that aforementioned foul). He pulled it back in the second half, so turn 16 was poised, two all. He considered a quick blitz but instead lined his guys up to increase the number of dice I'd need to roll. Ball with a wardancer, who needed her built-in reroll for dodging through tackle zones so I switched to leap and failed, leaving us on a draw.

Game 3, vs Hobnail with Skaven
I faced Hobnail before and we were trying to remember the match up - he thought it was an Amazon off as we both had Roxanna, but I think I had Dark Elves. He comfortably thrashed me by being the better player, but I've learnt a lot since then and was pretty sure I could give him more of a challenge, although I still hate facing skaven.
The game started off well, with me winning kick off and electing to receive. Scooped up the ball and went to throw it to Jordell, but my thrower wasn't happy - her pass skill turned from fumble to inaccurate and it flew off the pitch. Did I say it started well? I meant badly!
The scatter landed the ball at the feet of his gutter runners, who proceeded to scoop it up and run to the opposite side of the pitch. Strip ball got it loose, but it had taken all my effort to achieve that and I couldn't grab it up. Fortunately for me, he decided to start his next turn with an easy block with the rat ogre. Who double both downed. And died. This made it a lot easier to retrieve the ball, and a few more dead rats meant it became a lot easier for me to control the pitch. Luck was on my side for sure (another blitz helped), but I definitely played better than the previous time we faced each other.

Game 4, vs 20phoenix with Skaven
More Skaven! I was feeling a bit more confident about such a match after my previous game and I managed to score quickly, but this turned out to be hubris: the pride before a fall as elves fell left, right and centre.
I started the second half with 2 line elves and all 3 wardancers on the pitch, which gave me a false hope of maybe at least a draw, but my lack of players meant I was taking risks and managed to kill or at least KO more. He was also a slow player of the non-chatty kind, which is a good way of making me lose concentration and take more risks.

This was my first game against a wizard, and whilst it vexed me intensely that I couldn't break his armour yet he was killing all my players seemingly at a glance, he did play well and as he needed to: if the dice had been more even, I like to think I might have won because Strictly Come Wardancing is a powerful team, but I couldn't say for sure. I'll admit, however, that it took him noticing how miserable I was feeling and apologising for something beyond his control - the dice - before I started enjoying the game again! Which makes me feel petty, but the feeling interested me too, because we do this, apologise for the dice, and I've always felt silly for doing it when it's been me to my opponent, but it really did make me feel better so maybe I should feel less silly about it next time.

Final placings:
Well, I didn't get most TD, and actually would have been hard-pressed to get it even if I'd beaten 20phoenix, as SFisher came from behind to take it with 13 TD, having scored an impressive 6 in his final game. I came 8th of 34, Husbit (Lunchmoney) came somewhere near the bottom, 20phoenix came second, but the overall winner and winner of the High Elf challenge was NAF president, Sann0638. 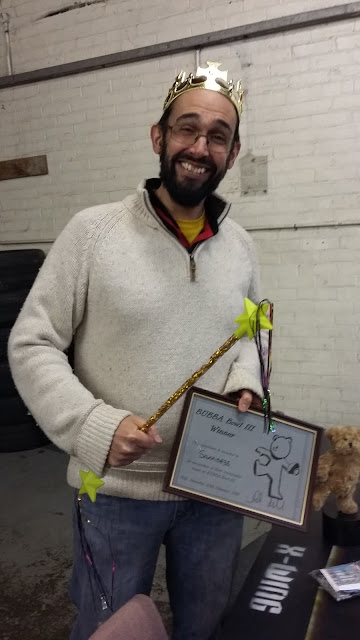 Happy Blood Bowl everyone! My next tournament is probably Crumb, but I'll try to write up a few more from last year before then (if I can find my notes).
Posted by Fern Kali at 12:00 3 comments:

This follows from an old post about throwing cards. I returned to writing up the two decks that I intended to follow, but got distracted by this.

This deck of cards has the shabby edges and warm softness that is its way of returning the love it's been shown over the decades.

It was created by a travelling mage to thank a family who'd taken him her in, sheltered her during a period of stormy weather she hadn't prepared for. She entertained them with minor illusions and sleight of hand trickery, and when she moved on she left behind many of their items with minor enchantments: a candle that could be lit to give light without melting the wax or burning the wick, without risking fire to anything for the youngest child, afraid of the dark; a scarf that, when worn, helped ease the coughing and uncomfortable breathing suffered by the oldest family member; a book of bedtimes stories that contained far more stories than would fit on its pages.

The family had several decks of cards for games when the weather got as bad as that evening, and the mage filled this on with the kindness she had been shown.

It was passed down the generations until whatever twist of fate has led it here, to this story.

Each card has its own ability, intended to be minor cantrip level - a flavourful item, rather than something epic and game-changing. I'm interested in magic items that aren't directly adventuring-hero based, things that you can imagine an ordinary person using in their everyday life, and that's what I've tried to go for here. I've used a traditional western deck (13 cards in each of spades, diamonds, clubs and hearts) as a basis because most people I know have such to hand, but if you want to use other cards you can always use this as a starting point.

Whilst each card has an ability, if the deck is split up or a card lost, the enchantment will end until the deck is reunited.

The Hearts
Mostly minor first aid - if the injury would require actual medical attention or healing magic, these won't help but are more to deal with the inconvenient injuries and illnesses of day to day life.
Ace - hold over a wasp sting or mosquito bite or similar to cure it
Two - rub over nettle or other allergy rash to relieve the itching
Three - kiss the card to relieve toothache
Four - place the card on a graze to heal it (the worse the graze, the longer you'll need to leave the card there)
Five - place the card on a bruise to heal it (worse bruise: longer time)
Six - place the card over a minor scald or burn to heal it
Seven - place the card over a sore or strained muscle to relieve it (worse strain: longer time); relatedly, hold against abdomen to relieve period pains
Eight - hold against your forehead to relieve a headache
Nine - sleep with it under your pillow to help relieve cold/flu symptoms
Ten - sleep with it under your pillow for a good night's rest
Jack - tap the card to spots to reduce acne
Queen - kiss the card to improve your fertility
King - hold the card and think of a loved one and they will feel loved and peaceful