I attended the skill-tastic Cake Bowl for the first time last year, taking Slann because I like leap. Turns out, frogs don’t leap very well. The previous year, Husbit had taken a Wood Elf line-up that I named Strictly Come Wardancing – 8 line elves (with dodge), a thrower (with leader), 2 wardancers (guard/strip ball), no re-rolls… and Jordell Freshbreeze. He was pleased to walk away with most touchdowns* and most of his opponents walked away cursing Jordell.

The set up looked a lot of fun, so I took them to last year’s Exiles Open (5 - Werewolf Strikes Back). With fewer skills, only 3 of the line elves could have dodge in order for the positionals to remain skilled. Jordell spent most of his time face-planting into the Dead & Injured box: he needs 2’s for basically every action but did nothing. Fortunately, the rest of my team behaved and I had great fun until I came up against Merrick’s Skaven in I think game 4, at which point everything started to go wrong and the good luck that had sustained me deserted me. Bloody rats.

I then had a few more tournaments with dark elves and other teams and the usual threatening to rage-quit Blood Bowl because nothing would go well, before taking halflings to NAFC. I liked the “Re-Rolls are for Pussies!” play style, so I wanted to try Strictly out at Cake – especially with all those yummy extra skills. 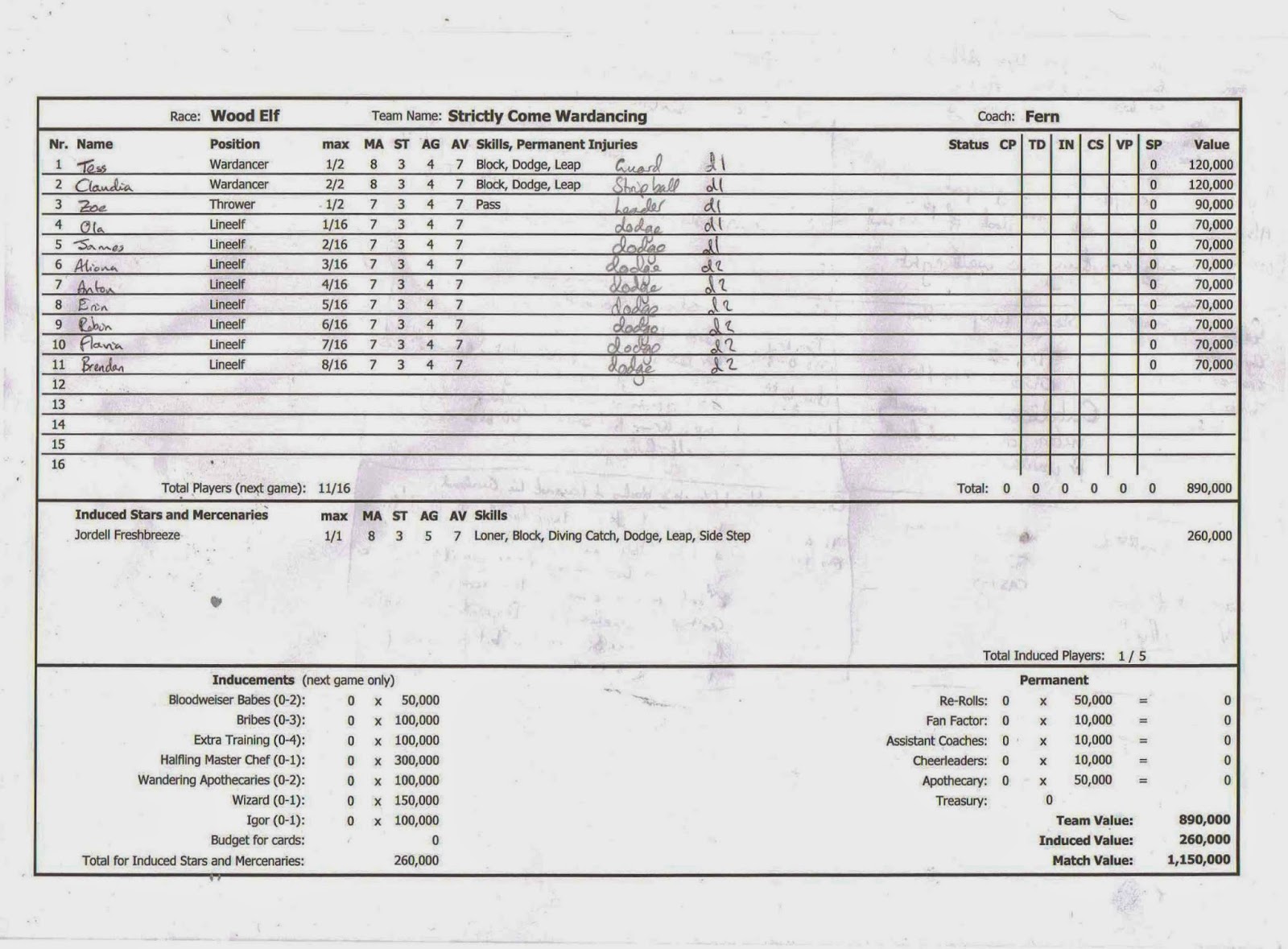 So it was that we arrived in Swindon in time for a full English breakfast at the Great Western Hotel before games (and cake) commenced.

Game One – vs Cantaloupe and Dib Dib Dib

When my second block resulted in one of my line elves on the floor, I was expecting a bad game; but then his team repeatedly rolled 1’s to pass the ball and 2 blitzes on kick-off fell in my favour meant he didn’t have much of a chance. His tree was too slow to be of much assistance to him and he ended up tearing through his re-rolls to give me the win.

A very enjoyable game that basically fell down to me absolutely outdicing him.

We started in a blizzard. Knowing my only re-roll was from the leader skill, Shortarse was very keen to destroy my thrower: it would appear, however, his thrower was the one listening – quickly leaving the pitch and staying there. He then decided he need to hurt my players to gain the numbers advantage – and again it would appear the wrong team was listening, as most of his players landed in the KO box and refused to come back. Towards the end of the game, he had to set up with a team of 3 gutter runners: unsurprisingly, I scored again quickly from that, leaving him one turn to get one last touchdown. A few players made it back onto the pitch from his KO box, which meant his only hope was a touch back and a quick snap. The ball obliged, flying off the pitch. I rolled kick off… a 9! Quick snap gives him a chance… the blocking goes as it should, the gutter runner races down the pitch… and the blizzard knocks him to his feet!

At the end of the game, even the crowd had done more casualties than the rats – one wardancer being killed by a rock early on, and the other torn to pieces after being pushed into the midst of the rats’ fans. A moral victory, but I imagine not much consolation.

Final score: 4-2 TD and 5-0 CAS (which briefly put me top of table, top of most TD’s and top most CAS – until Hawk’s score came in and pipped me on the CAS front)

As I commented in my write-up of the NAF Championships, Lizards are not a team I face often, but they seemed a little less intimidating with Wood Elves. Choosing to receive, I wasn’t able to knock over the saurus targeted with my blitz so to protect Jordell (holding the ball) I stuck him on the sideline with wardancers on the two corners, figuring Sann wouldn’t want to dodge a saurus into that and a skink would be on (at best) 1/2die – if he got the lucky double-pow, there would still be 2 wardancers ready to pick the ball up and score. A skink did indeed come running in, thinking to shove Jordell into the crowd… but he side stepped away. Sann’s face was a picture! From there, of course, it was easy to get that first touchdown and somehow (with the annoyance of 3 leaping wardancers) I managed to keep him from equalling in the first half. By the second half, however, I was starting to run out of players (feeling a certain degree of sympathy with those brave gutter runners from my previous match) so was very pleased to defend as well as I did – a failed leap from a wardancer coming in to blitz the ball carrier secured his TD in the final moments of the game.

The plan had been to stay at Mike’s, but his children had come down with some form of bird-related illness I’ve somehow managed to avoid thus far. Chicken pox is nastier to have as an adult, so we decided a better plan was to drive home and back up in the morning.

I was concerned about this game: I’ve never faced Wightlord before, but his name suggests he is used to using Undead and speaking to other people I gathered he is very good. However, he was clearly afraid of me (or possibly Jordell), quickly getting in his excuses (upset stomach from dodgy food the night before) as we settled down to play the match.

The team line-up wasn’t dissimilar to that taken by Husbit so I was at least vaguely familiar with the pros and cons of the various players – which to watch out for, which to target and which to run the hell away from. He won the kick off and elected to receive; a slow grind down the pitch left me relying on Jordell’s brilliance to get the one-turn TD and equalise. Chain-pushed into position (<3 sidestep), he dodged away and ran down the pitch – two GFI’s needed – and a 2 comes up… curse the second blizzard of my weekend! Jordell did again what he had done so well at Exiles, and died.

Second half, and without Jordell I was a little worried. The rest of my team decided to prove I didn’t need him, however – scoring neatly and working hard in a failed attempt to keep him from retaking the lead. Final set-up and he carefully positioned his team to prevent another attempt at a one-turn TD. “I just need a riot,” jokes I. Kick off rolled – a riot. And like that, my team managed to equalise. Jammiest draw ever! (although, I can’t help wondering whether I might have made a win if Jordell had succeeded that GFI…)

Game Five – vs Heff and Lower Than Vermin

Part of me feels very sorry for the poor little rats, being named after coalition politicians. I have a lot of time for rats. On the other hand, it made me feel less guilty for beating them up (not that you’d know it from the CAS score in comparison with other rounds).

Seeing Skaven again, I was hoping for another high scoring game – Shortarse and I both chasing most TD’s and being very close. Elected to receive and stormed down the pitch for an early score. My dice weren’t as bad as at other tournaments, but during the rest of the first half they were the worst I suffered during this tournament and bad enough for Heff to comment. He changed his mind in the second half, though, when the luck switched sides.

The match was hard work, involving lots of thinking on both sides. One-all at turn 15, and my thrower (the only member of my team without dodge) is holding the ball on the white line – didn’t want to risk the GFI after my last game and knowing I still had a turn. With a couple of other players in support, I felt secure in the win.

A gutter runner came running in, dodging to position for the half die block. Double dodge-down! NOOOOOO! The ball bounced off the pitch as Zoe the thrower was stretchered off the pitch and into the Dead & Injured box. The throw-in left the ball in position for a gutter runner to grab it and throw to another gutter runner for an easy score. Busy working out in my head whether I can manage the one-turn required to equalise after this when the receiving gutter runner fumbles the catch! A wardancer races in, blocks the gutter runner away from the ball. A line elf is in range to scoop the ball up – a short pass to another line elf who can run it in and I’ve won! But that would have required successfully picking up the ball. Nuffle clearly wanted a draw.

Going into this round, Cantaloupe, Shortarse and I were neck and neck for most TD’s, but I was comfortably ahead on TD difference. All I needed to do for the prize, then, was make sure I scored at least as many as they did. Knackered from the game before, I was actually pleased to draw against Husbit – it’s a while since he and I have faced each other at a tournament and I knew it should be an enjoyable game.

He chose to receive but I got a blitz, allowing me to score on turn 1. After that, rolling double skulls when I could have dodged – and then failing 2 dodges – meant at half time the score was ‘only’ 2-0.

In the second half, I scored quickly after a bit of a mess. Reset, and he can’t pick up the ball so my elves elf at him to score again. With only 2 turns and 2 ghouls left (one had died from a dodge, another from a failed dodge), he knew he could score but it wouldn’t be easy: crazy play was involved with a successful pass. The elves swarmed in, stripping the ball from the ghoul but leaving him on his feet. Figure I’ll jump Jordell over to pick the ball up and stop him scoring, but first a block… yeah… so no one marking the ball… The ghoul grabs it, dodges, runs and SCORES!

And the results are in…

Only one stunty player, so no stunty cup

Shortarse had pipped me to Most TD (by one! I did at least feel a little less bad about the blizzard defeating his gutter runner) (Warpstone Stars – Skaven)

And a lovely drive home to curl up with a purry pussycat and admire David Bowie in Labyrinth: the celebration of champions! (Husbit was happy with his 2-2-2; a little annoyed that our game meant he ended on negative TD, but also had a wonderful weekend.)


*Husbit tells me he did not get most TD's with Strictly Come Wardancing, but that's very much my memory. Apparently it was actually fellow Exile Irish Dave with Pro Elves and my memory of Husbit's excitement is probably that he finished on a 3-1-2, his best result to that date.
Posted by Fern Kali at 20:41