Husbit has a bit of a reputation for playing Blood Bowl fast, so in addition to the normal Exiles Open tournament he runs, a couple of years ago he took up the challenge of running a tournament with strict 2 minute turns – Exiles Presents: Speed Bowl.

The first tournament was a one day event in 2012. Husbit (Lunchmoney) played because there was an odd number, so I was glad I could use Score – the tournament software we use – and whilst people played I curled up with Juliet Marillier’s Daughter of the Forest: not necessarily the best choice to read in a room full of Blood Bowl players because I kept having to fight back tears!

The tournament went well, so last year Husbit decided to see about making it a two day event. The best bit about this was that people from further away were prepared to come, whereas one day events are not so worth it. 10 games in two days was hard work for the players – it was tiring enough for me doing the admin!

This year was the third event Exiles Presents: Speed Bowl – Lightning Strikes Thrice! We’d gone back to one day (5 games) for cost reasons and had several players who hadn’t attended a Speed Bowl event before, which was exciting. Again, an odd number of players meant the admin was mine and I brought a more sensible book – The Count of Monte Cristo by Alexandre Dumas.

Each pitch was accompanied by two timers and I had a stash of spare batteries because the timers were just starting to fade out. A quick reminder that all turns are strictly two minutes in length and you run your opponents timer. If you’re doing some kind of interrupt action (pass block; intercepting a thrown ball; special play cards; etc) then you pause the timer – but remember, the whole time you’re acting, your opponent has time to think!

The Exiles players have unfortunately not been able to make such a good showing tournaments this year as in the past, and Speed Bowl was no exception with only Lunchmoney and exp.god representing the local side. We were, however, lucky enough to have a very impressive turnout from the Bristol crowd and many other friends – Darkson, Glowworm, Sillysod and everyone else.

The night before, I’d been out for a friend’s birthday for The Sacre Blue’s gig at Inferno and ended up staying out later than I intended. So I kinda slept through most of the day… (totally worth it! I always forget Peakey can sing).

Going into the final round, there were 4 people with a chance to win, but ultimately Itchen walked away with the prize. 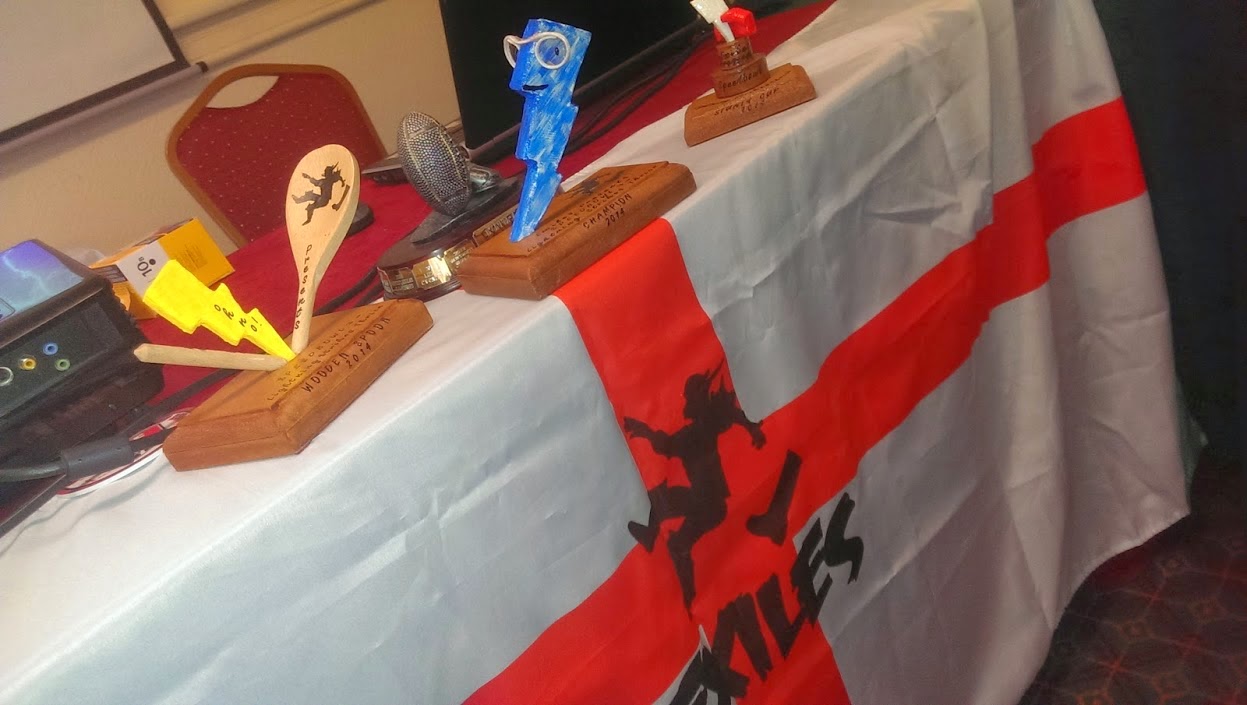 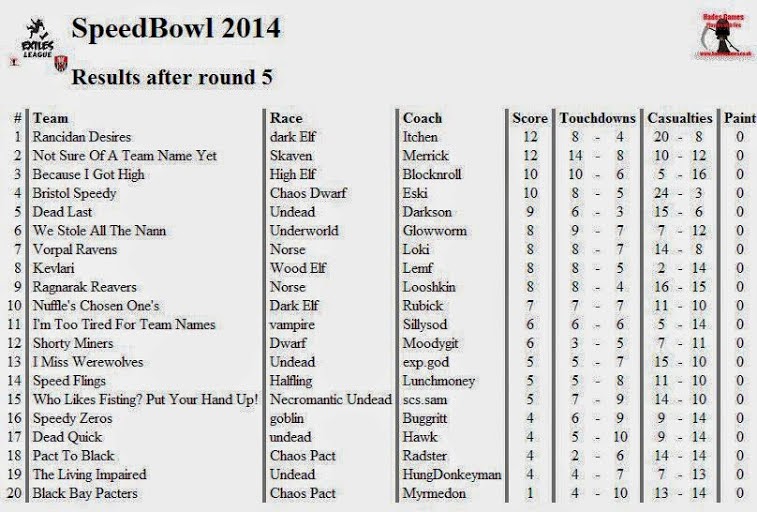 Glowworm award – Eski (for those who don’t know, Glowworm came fourth at several tournaments in a row and complained you don’t get anything for fourth – so Hudson and Husbit independently developed the Glowworm award, ditching third place and awarding fourth instead. The award has spread internationally.)

Stunty Cup - Lunchmoney (he wouldn’t normally award himself a prize at his own tournament, but there was only one other stunty player and also he’s been after a stunty cup for a while)