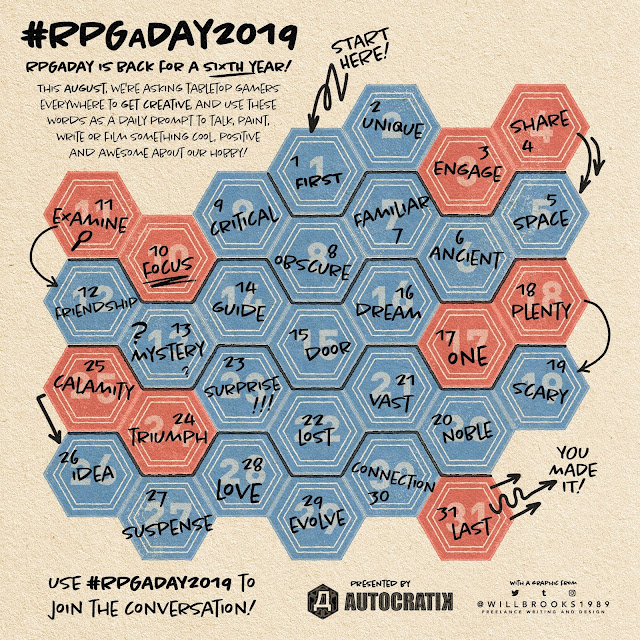 Monday 12th - "Friendship"
Friendships are vital for good gaming, and I've made loads of new friends that way too, and I've talked on that theme before so I'm going to talk about in character friendships instead, because those are also fantastic.

The big ones have been (more or less in chronological order): Kamaya with NPC's Drazen and Tark; Kella with PC's Kyann, Rax, and especially Reisha; Plays in Shadows and the other PC's making up her pack; Svetlana and the NPC's I created for her backstory; Chrissie and Adam; Taji and Kito, and Taji and an NPC you'll be meeting very soon in the Exalted storyline.

We're currently playing Aberrant so I think the friendship between Chrissie and Adam is a good one to discuss! We've been joined by another player (one of those friends I've made through gaming) whose character, Morgan, is important to the team but, coming in later, isn't as close  to the other player characters as they are to each other. Chrissie and Adam's friendship is a little strained by the events leading up to and following Adam's incarceration but was forged in strong fires. They had almost polar opposite upbringings, have slightly different morals stemming from differences in their pre-nova lives, were forced together by circumstance (and Benedict...) and have done their best to save the world (or at least make it a better place) many times.

Tuesday 13th - "Mystery"
Running a mystery game is hard. You need to leave breadcrumbs that will seem way to obvious to you, yet your players either will completely misinterpret or won't pick up at all, then you have to figure out how to guide them out of the rabbit holes without making it too obvious, because if it takes too long or feels too hard, the players won't have fun. I've always wanted to play in a mystery campaign, but have no idea where to start to run one.

Back to Aberrant (and friendship). We're currently playing a mystery scenario. Chrissie had a friend in her backstory, Bill, who's recently been killed! Investigating, Chrissie found clues he'd left that only she could find, leading to the word "Protos". We've now spent several sessions trying to figure out what on earth is so important about "Protos" that Bill went to such effort to hide it in such a way only Chrissie could find it. We've definitely gone down several wrong paths and the GM has helped us out by rephrasing things or giving us new ways to find information. We've finally tracked down the people behind the word, but still don't know what it all means...

Wednesday 14th - "Guide"
There's a real joy to be had in being a guide bringing new people to table top roleplay. My best experience in this role was at uni, where a friend of mine on my course and also in the roleplay society wanted to introduce some other friends of his to gaming. He ran Space Munchkin, and invited me along to show them what it was all about, and act as a cattalyst to keep things moving. I played a cat person wiht force powers and incontrollable curiosity - the other players were soon having their characters grab my tail to yank me away from any red button or hatch labelled "do not open". It was great fun to play someone that reckless, and it was great fun to see them enjoying something they'd never done before.

Thursday 15th - "Door"
I love welcoming new players to roleplay. I think it's a fantastic hobby that gives benefits in normal life. You hear about hobby gatekeepers, but I think it's important and wonderful to hold the door open to everyone who's interested.

Friday 16th - "Dream"
I start a new job in a few weeks, and I'm anxious about it because it'll mean less time with Ziggy. Less time for my hobbies, too, but missing Ziggy is my biggest anxiety. The dream, then, is to have a job that pays enough to meet our outgoings and lead a comfortable lifestyle but that also has minimal (and flexible) hours. This was, I believe, a promise of automation that we haven't seen (there's a rant I could go off on...).

I was chatting about it with my regular GM. If I won big enough on the lottery, I'd love to be able to pay my friends to play with me (and especially the GM, because I think they put the most work into a game). He, in turn, would set up an office and employ us all to help develop the game he's working on. With an ice cream machine and mandatory naps.

I kinda hope he does win the lottery!


Saturday 17th - "One"
I was really struggling with this prompt and asked Husbit's help. He suggested one on one sessions, mentioning the Deadlands one he ran at the Asylum, which was effectively 4 one on one sessions, rotating between the players. He did a really good job of bringing personal horror into it and amping up the dread. I think this is something easier to do one on one, as the GM can really focus on that one player, and the player isn't distracted by other players' responses.

My most recent one on one session was in Aberrant, where I'd missed a session so played through the time separately later. I feel like I got a lot more done in that one session than in the normal group, which again goes to the way players are like cats: easier individually, but a nightmare to herd.

Sunday 18th - "Plenty"
The one thing I have plenty of for roleplay is dice! I've played diceless and there's other diceless systems that interest me, but I do love rolling great handfuls of dice. 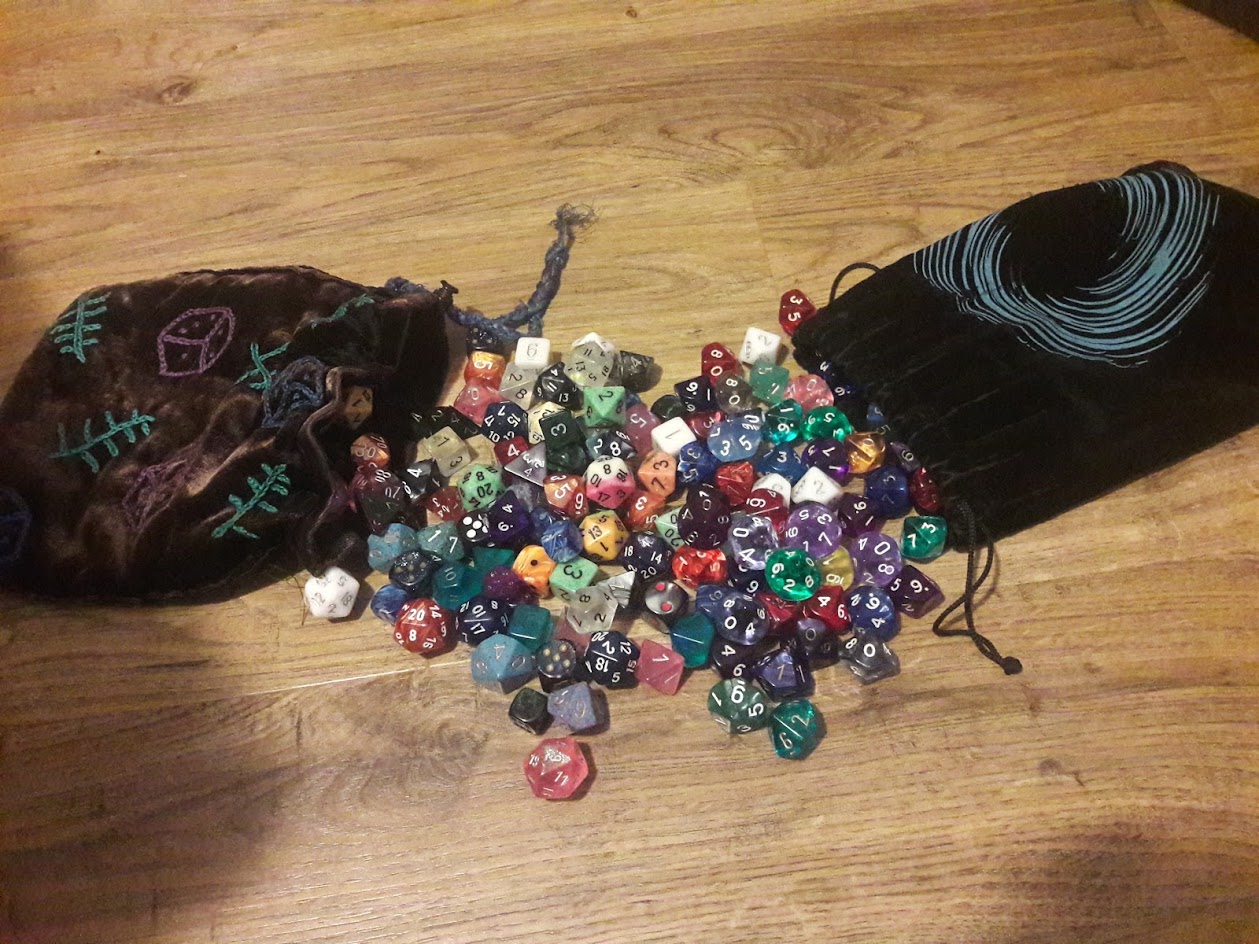