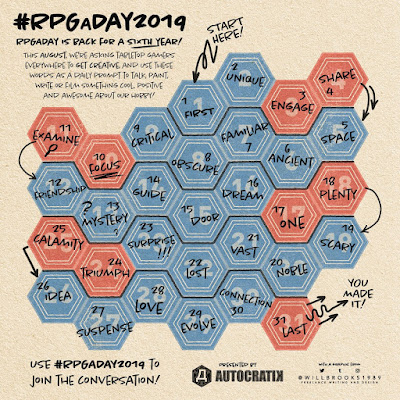 Monday 5th - "Space"
I'm going to borrow from Autocratik and talk about our gaming space. We had a decent-sized wooden table with benches rather than chairs that had a homemade 6' by 4' gaming table over the top, complete with static grass. It made a decent table through several flats, but when we moved to this house, the previous owners left their table - longer and with actual chairs. It's in the dining room, an extension of the kitchen (so very convenient for coffees). The previous owners originally wanted a conservatory, but found it too hot in the summer and cold in the winter, so made it into a permanent structure instead. In keeping with their intention, though, the room has large skylights and windows, so feels light and airy. We've got a couple of bookshelves in there, to store dice and books for current games (the other books are in the Kallax in the study), and the toy cars for Gaslands, which Husbit's got really into recently.

I prefer to play sitting on sofas and the floor, but I'm outnumbered in this group, and the space is good.

Tuesday 6th - "Ancient"
I love settings with ancient tech, no longer understood. I'd very much like to play Numenera one day, but my experience in this comes a little from the Final Fantasy-themed game I played in at uni and largely from the Exalted game where I play Taji. I really enjoy whenever we find something ancient and try to learn about it in that game - made a little easier by a certain NPC (or two... or three) who remember those days.

A good example was the recent Exalted post "Our First Command", where we found some old tech stolen from the tombs of ancient Solars (and where I rolled a triple botch and accidentally triggered a defective Thousand Forged Dragon, destroying all the evidence and some of the loot we'd found). The next post is one I'm really excited about, because it will introduce one of my favourite NPC's, and one of those who remembers the First Age when all this tech that seems so magical to Taji and Kito was considered as commonplace as a mobile phone today...

Wednesday 7th - "Familiar"
I like the idea of having a familiar, but have never played a character with one. Animal companions once or twice, but never yet a familiar. I'm torn between whether I'd want a cat, a kestrel (or similar raptor), or a crow (or other corvid) - or maybe a rat or a ferret or a snake or a spider... It's definitely on my list to do one day, in the right game (maybe this one).

Thursday 8th - "Obscure"
The most obvious way to take this, to me, was to discuss an obscure game I've played, but I can't think of one, so instead I've gone to the verb meaning.

Generally, I dislike it when one player obscures the truth from others, but there's times it's great fun on both sides. I generally enjoy it more when it's some dark secret from the character's background but also when it's something coming from gameplay - as long as it isn't the character working against the others and as long as it comes out quickly. I get anxious with hidden secrets, even benign ones. Husbit loves them. His character Alexei in Pathfinder has a lot going on (though I swear half the time he and the GM are just passing notes that say "this is a secret note"). Another character in our other Pathfinder game has some secrets that are starting to come to light, but these were more character secrets than player secrets, and came from backstory.

I did once have great fun being the player with the secret, when Svetlana was sneaking around with the group's patron, the king of Brevoy. We resolved it quickly, but I finally understood why Husbit enjoys obscuring secrets so much.

Friday 9th - "Critical"
I'm sure I've said it before, but the thing I consider most critical to a good game is playing with people who want the same thing as you. In my case, that's lots of character-driven story so those people also need to be people I'm comfortable getting vulnerable with. It's part of why the Exalted game is so dear to me: there's a large world to explore, but the story is made by the way the player characters, Taji and Kito, interact  with each other and the vast stable of NPC's. I think the closeness of the twins helps - I also really enjoyed a Pathfinder one-off where we played mentor and mentee in a similarly close way - and the life the GM has breathed into the NPC's is the icing on the very yummy cake.

Saturday 10th - "Focus"
I feel like I'm being told off! I don't have AD(H)D but my brain often sprints off after the proverbial squirrel regardless. It therefore seems most apt to discuss the things that send us shooting off topic the fastest! I'm sure all groups have them, key words, phrases, or concepts that derail play until the rabbit hole is cleared. Ours include:
Of course, it's Ziggy who most often derails things now!

Sunday 11th - "Examine"
This wasn't a game I was in, but one Husbit ran for our friends while I was away at uni. A Ravenloft game, with lots of gothic horror and personal tragedy. They'd finished a dungeon hack-style encounter and had emerged, blinking, into the sunshine. Husbit described the scene: the fields, the clear sky, the fields, their horses happily eating the grass and still tied to the tree, the kestrel sitting in the tree watching.

There followed an in character conversation that lasted around an hour debating what to do with this kestrel. Was it food?, a threat?, a spy?.. Husbit has told this story with two punchlines. The kestrel was due to be the ranger's animal companion... the kestrel was an incidental bit of scenery with no significance.
Posted by Fern Kali at 12:00