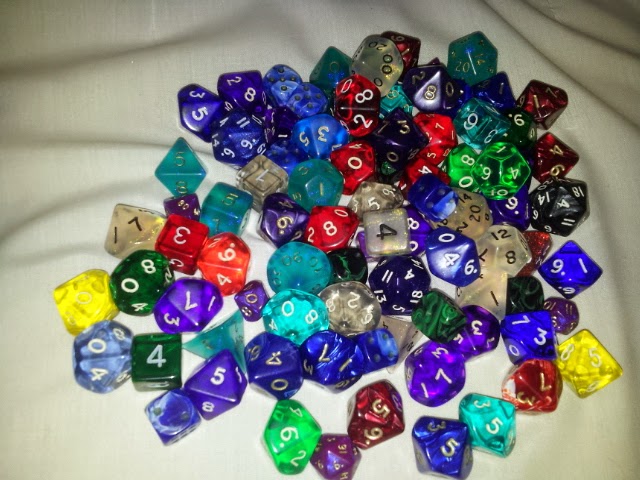 I’ve been inspired by Crystal’s recent blog post and Husbit’s boasting to write my own post on dice.

Like a lot of geeks, I have a lot of dice and a lot of love for my dice. I’m going to assume that my readers are at least mostly geeks (even if not necessarily playing the same games as me) so will be familiar with abbreviations such as D6 for a 6-sided dice (and also used to the fact that dice come in shapes and sizes other than that standard cube).

I’m starting with my Blood Bowl dice, because these are a little different to standard. 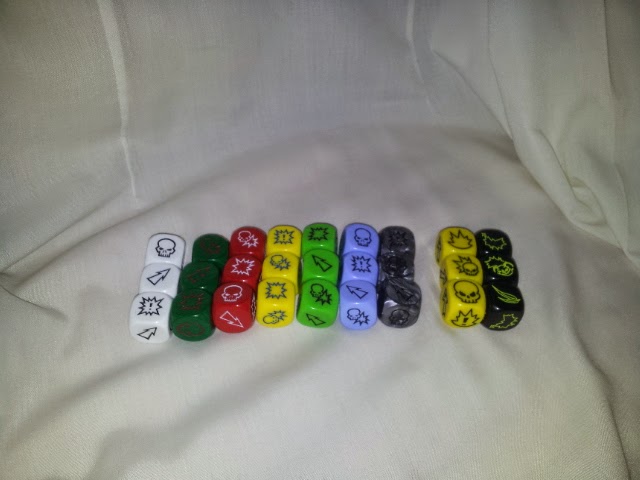 If you’re familiar with Blood Bowl, these dice need little explanation. If you aren’t, the symbols probably look a little odd. Basically, when you hit someone in Blood Bowl (‘throw a block’) these are the dice that determine the outcome of that action. You roll between 1 and 3, determined by the ‘strength’ of your player vs the opponent: same strength = 1 die. If you’re stronger, 2 dice and you get to pick – if you’re weaker, 2 dice and they get to pick. If you’re more than twice as strong (or weak), then it’s 3 dice (for instance, a strength 5 mummy from the Undead team hitting a strength 2 halfling from the, well, Halfling team)!

There are 4 possible outcomes, demonstrated by 5 different symbols. The jagged star-like symbol (usually known as a ‘pow’) means the defender falls over – the ‘pow’ with an exclamation mark means they fall over unless they can use the dodge skill (this is why there are 5 symbols for 4 outcomes). The arrow means the defender is ‘pushed back’; the skull means the attacker falls over and the skull/pow means both the attacker and defender fall over. Besides dodge, there are a few other skills that affect this, but I’m talking dice not Blood Bowl so that’s not important!

The various different colours of the standard blocking dice have been produced by the NAF and were given out in different years to those who signed up to the organisation. They have, in the last couple of years, moved away from blocking dice. 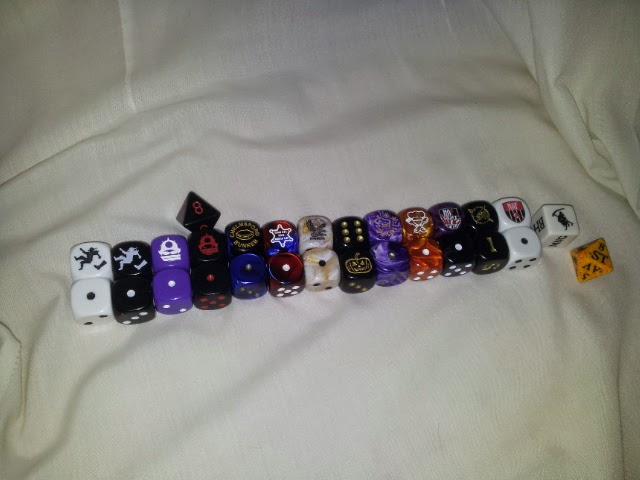 Most of the time in Blood Bowl you need D6’s, and a lot of leagues and tournaments produce their own as giveaways. In the photo above, you can see my little collection that I’m rather proud of. L-R: Exiles League (white and black); Lutece (purple and black, inc D8 - black from World Cup 2011); Chelmsford Bunker (blue); Team America (red/blue from World Cup 2011); "Hawk'd" (cream - awarded for being thrashed by Hawk I forget when. Exiles 2013?); ARBBL (black); Chaos (purple - from Glowworm at the World Cup 2011); Halfling dice (caramel - given by Chance of 3 Die Block after a bad night at NAFC); Fling dice (black/purple - because I took Halflings to NAFC2014); NAF (black - for membership 2013. Came with a D8 that I lost and a D16 I forgot to photo); NAF (white - for membership 2014).

The last D6 - the one with a little death symbol - is for determining what happens to a player killed on a block. Usually more important for league play than tournaments – players can be out for the rest of the game (‘badly hurt’), out for this and the next game, ‘seriously injured’ (and this is when the orangey D8 comes in as well, to see what sort of injury – less armour, less movement, etc) or DEAD. You can use a normal D6 and D8, but this set is kinda fun.

D8’s are for scattering the ball (or a thrown player).

Most of my dice are for roleplay. I like systems where I get to roll lots of dice in one go – like ShadowRun and World of Darkness (Pathfinder is forgiven for being D20 based purely because it’s awesome) – but even systems which only use one die at a time – like Savage Worlds or Call of Cthulu – necessitate me owning more than one of that die type because should my dice misbehave (ie, roll me too many failures with too few redeeming successes) then I need to switch them out for others.

Ah yes, dice punishments! A good traditional one for misbehaving dice is to stick them in a sweaty trainer. Take them out after a while and see if their behaviour has improved: if not, into the other trainer they go and that’s it for the rest of that session. One friend would place the miscreants into a plastic tub with chances for reprieve: those who remained in the tub at the end of the session would be banished to the fridge until the next game. Several people will launch dice across rooms or out of windows (I know many stories of dice being thrown out of windows to be discovered in car parks or streets with top successes showing). I even knew someone who would melt particularly badly behaved dice as a lesson to the others. That’s the most extreme punishment I know; anyone got anything worse?

Most of my dice are fairly generic, but here are some special ones: These haematite dice were a present from Husbit when he went to a gaming convention at the Tank Museum without me as an apology for his crazy assumption I wouldn’t want to go. Very rarely used but I love these. 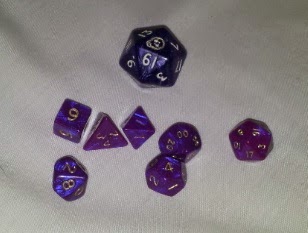 From my brother because they’re pretty. Again, not used often because they’re smaller than most of my dice (other D20 for scale), but if I eventually get enough little dice they will be. 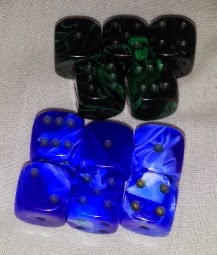 I need to paint in the pips again. Originally bought for ShadowRun, these dice worked well for me in the homebrew Final Fantasy Noir, where some events were determined by rolling a number of D6 and then straights/pairs/etc would determine outcomes. I don’t remember the exact details but we played with various different methods of using dice to insert randomness into the game and that was one of the more unusual and entertaining ones. These days, these dice are used for Svetlana’s sneak attack damage (hence the need to make them more readable again). 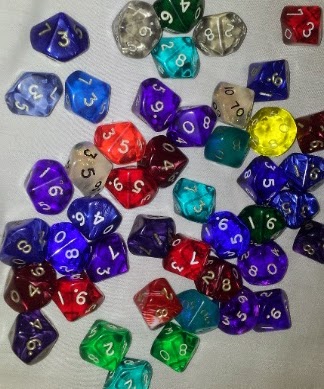 Yeah… I have a few D10’s. What can I say? – I love World of Darkness! Most of these were originally purchased for the wonderful Werewolf/Vampire/Hunter campaign I played at uni. I’m now playing in an Aberrant campaign (run by my Pathfinder GM) in which we are deliberately (super-mega-hyper-)overpowered so I figured I needed more dice* and that’s where the rest of the bunch come in. I don’t have 10 in any ability, attribute or mega-attributes yet, but want to be ready! The red are for mega-attributes because that made sense to me; purple are attributes and blue abilities. The turquoise are for specialties – you don’t need to separate specialties from skills but I like to differentiate where successes originated because I’m sad like that. (There will be tales from Aberrant in the future – we’re doing an extended character gen prologue that I want to complete before I start writing up.)

I love dice. If anyone ever wants to make me happy, send me random pretty dice and I’ll be smiling for a week!

*As a quick aside, I was very impressed with the communication from Tritex Games when I bought those extra D10’s: I wanted gem dice to match what I had, but they didn’t have enough so agreed to send as many gem and pearl as they could, and carefully selected the most legible marble ones where necessary so I had enough. And they arrived the next day, just in time for my game!
Posted by Fern Kali at 12:54