We left Drezen accompanied by Queen Galfrey and headed to the Midnight Fane – the temple where the rift to the Midnight Isles was located. We were greeted by a group of incubi, advising we are expecting and offering to take us to their mistress. In an uncharacteristic show of restraint, Kieran managed not to run the demons through with his sword but instead we let them lead the way to a chamber filled with an acrid purple smoke bubbling from a cauldron fed by (or feeding into) various tubes. A cambian demon pottered around, tending alchemical machinations.

A woman entered, recognised as Yanielle. She’s a paladin of Iomedae famous for losing her faith and regaining it following a journey to the Worldwound. She has recently been missing, following a second excursion. It looked as though we’ve found her, and it didn’t look good (although we clung to the hope that she’d been possessed). When she tried to convert us to Baphomet’s cause, it was too much for our shiny paladin and, with a cry of “How dare you defile Iomedae’s symbol!”, he charged her. The rest of us watched and waited for him to get it out of his system.

She collapsed to the floor, ragged and emaciated, her armour gone. Alexei and Kieran recognised her as a husk – a body that has been emptied so it can be filled by demonic possession. As they set about de-cursing and healing Yanielle, we realised the other demons had departed. Never mind.

Recovered, she agreed to join us on our journey into the rift on the grounds it would seem Iomedae has sent us – this reinforced to her when it transpires some of the kit we recently found and have kept hold of included her sword and armour.

We made our way down to the rift itself – a vast hall, one wall of which glowed and writhed in red and black. Taking a deep breath, we stepped through into a cave studded with purple crystals. 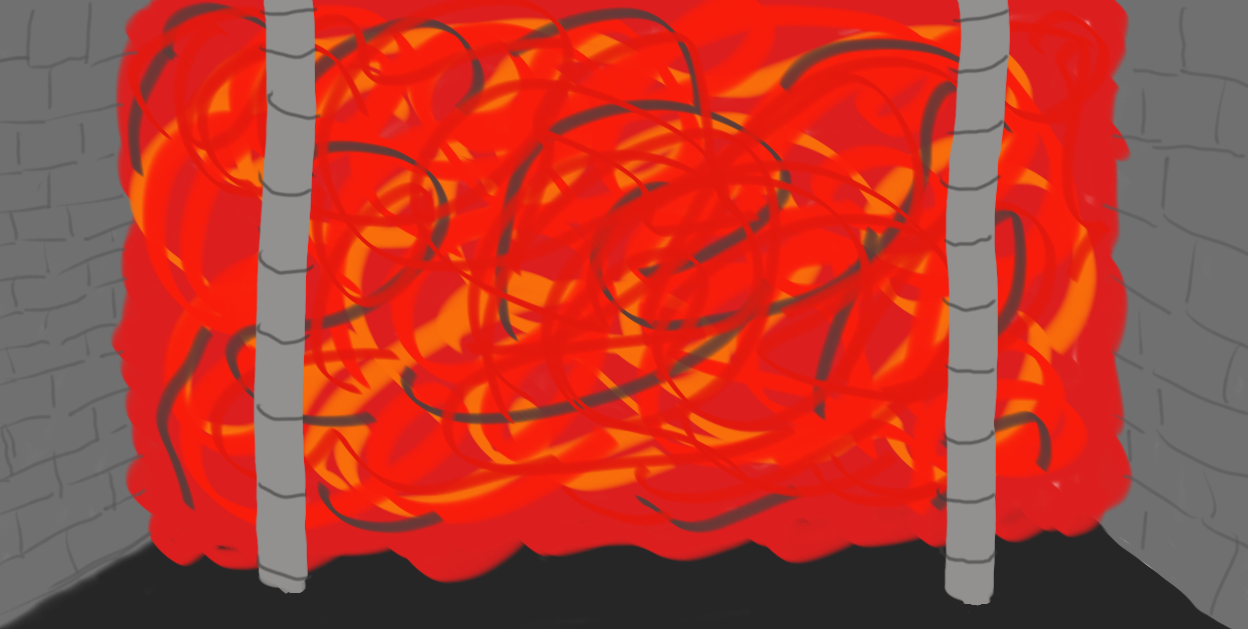 To close the rift, a page containing particular magic needed to be held into the rift from both sides. Queen Galfrey took this responsibility back in Golarion and gave me the copy to hold from the Midnight Isles. After a minute or so, the portal turned black and lightning arced from it. Alexei, Evander and Yanielle were smart enough to get out of the way, but Kieran stayed close to help with the next step and Aaron stayed nearby to take over if I fell. The lightning hurt less than I feared but more than I’d admit – Kieran seemed unaffected, drawing his sword and commanding a dispel from it. The other side of the rift, Queen Galfrey must have done similarly, because the writhing wall fell away (with just enough warning for me to dodge away) to leave a bare cavern wall. I shivered slightly at the thought of being cut off from Golarion and all I have there.

An oddity: beside Alexei stood a man identical in most ways, but clean shaven and smartly dressed. Alexei introduced him as Ivan, his dead twin. No longer connected to the Ethereal Plane but still tied to each other, Ivan had been manifested as we entered the demonic realm.

But onwards. We found our way out of the cavern – fighting a few minor monsters on the way – and into a dense jungle. It was night, but it’s always night in the Midnight Isles. The moon being out made it as close to day as this place gets – rather than ‘day’ and ‘night’, I’ve been thinking of ‘moonlight’ and ‘true night’.

Aaron and I spotted a strange grey stone mass creating a clearing in the dense jungle. With no better plan and grave concerns about how we would reach Nocticula’s capital, we approached to find a ruined temple. Aaron, having swapped his ring of sustenance, was by this point hungry and tired so settled to sleep whilst we considered what was in front of us: four statues of Nocticula in different poses, each with its own epigraph. A strong feeling of teleportation came from this device, but even once I’d worked out how to trigger each statue we had no idea which order to do this in, and with 33 options it didn’t seem sensible to try experimenting. When Aaron awoke, he knew which order we needed but couldn’t explain how. It was the best lead we had, and it paid off: we materialised in the centre of a busy square in what could be identified as the city we were aiming for.

So the next step was to gain attention. Kieran arranged rooms in one of the ‘nicer’ (or least brothel’y) establishments whilst I tried to make some connections. Through the grapevine, I learnt of an arena fighter making waves – a four-armed incubus by the name of Gelderfang. Defeat him, the suggestion went, and that would give some notoriety. To me, it sounded like a job for a paladin, but Aaron also expressed an interest and whilst we were discussing the best way to proceed, Alexei sought out the master of the arena and arranged the fight for himself. It may have been best this way: Alexei’s reputation has found its way even here and this way he could skip any warm-up fights against lesser opponents and go straight up against Gelderfang.

Kieran gave a dramatic introduction, but it was with a degree of trepidation we watched Alexei enter the arena, covered in his shadows. The fight lasted a while, but Alexei won through magic and trickery and, to the delight of the crowd, slit the incubus’s throat.