I know mostly I use this for talking about the most overtly geeky hobbies of mine (roleplay and Blood Bowl), but being a geek is something that pervades your whole being so I can be pretty geeky about things that don’t seem to be traditionally part of geek culture.

I was seeking some form of new and interesting form of exercise: the gym does not appeal to me at all, and I’m poorly motivated so need something social. One of my friends mentioned a ‘circus skills’ class and suggested I tag along. I’m really pleased I agreed!

The class takes place in the Project Climbing Centre (which is a fantastic facility I’m very pleased to have found). It’s run by a group called ‘Secret Circus’ (check out their gallery!). The people who run the class are very welcoming and encouraging, the other people who attend are friendly and the atmosphere overall is relaxed and supportive. I’ve not gone very often as yet (time and financial constraints) but I feel very proud of the progress I’ve made so far.

We mostly work on aerial hoop and silks: I think I’m better on the hoop because the silk requires a lot more strength than I currently have – but I am getting there. The hoop does need some strength, but balance and flexibility also help. Of course, tidy technique will hugely improve my ability in both media.

I've been trying (and failing) to upload a video; it’s the first half of a routine on aerial hoop that I’ve so far only learnt the first half of. The end move I mess up I’d only just learnt and was a bit cross not to be able to do when we were filming, but I achieved it in practice and there’s always next time!

Until I can figure out how to get the video up, here's a photo: 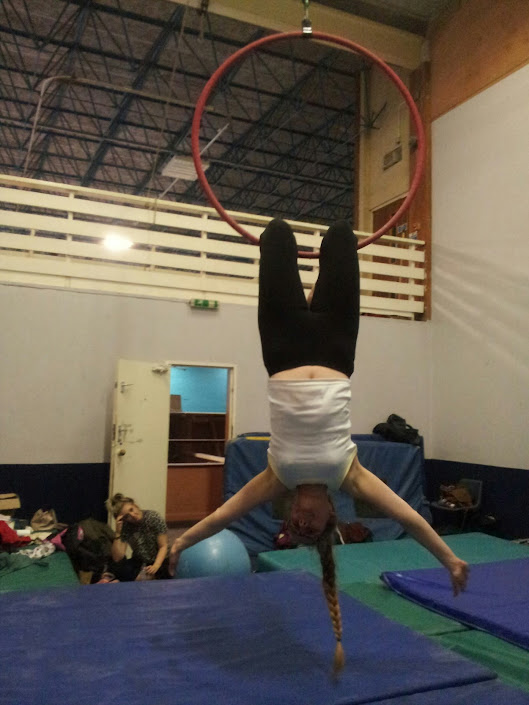