#RPGaDAY2016 - Day Eleven: Which gamer most affected the way you play?

I remember Star Wars Tom turning to me after a Buffy game and saying "You really get this. Do you wanna join my ShadowRun game?", so it was him and Andy, probably, more than anyone because they showed me the door.

I didn't know Tom as 'Star Wars Tom' at the time. That came later, when I was picking uni's. My shortlist was short, because I wanted to study maths and physics and knew I was worth a better degree than one requiring 2 E's at A-level. Tom was very excited at one of the two uni's that met my requirements: he'd been there 10 years earlier. It was the one I ended up at (quick tip: if you're picking a uni, ask as many students as you can the best and worst thing about the place. The one I ended up at: so many best things, and the worst always the weather. The other place I looked at? Best thing? "I might get a degree." Worst thing? "I might not.") I've told you before how I sought my tribe when there, and some of them knew my Tom by reputation, and others actually remembered him: "Your second GM was Star Wars Tom and you're still playing?" - he has a bit of a reputation for killing people off. Like that time everyone had secondary and tertiary characters ready and still ended up genning new characters... He had toned down by the time I was playing with him.
The things Andy and Tom did that impacted the way I play now were mostly tiny, throwaway comments - like when I asked Andy why he didn't do something obvious: "well, it's obvious to us, but <forgotten character name> wouldn't think of it", or the praise Tom gave me for attention to detail when I designed Kamaya and described the scar on her cheek from training with her whip, or the times they pointed out when I moved away from the character I'd originally described (I was young and bowed easily to peer pressure so the character shifted to something that went along with the group even when they went against her principles - that, to be fair, I'd largely forgotten). And most particularly right after that surprise when her friend (Tark! His name was Tark!) had his head blown off in front her, and my response was not to immediately do something clinically about it, but for 'Maya to find a pub and start drinking: Tom was really impressed because he said it showed how in character I was.

And then I went off to uni and again was lucky enough to play with lots of fantastic people who were interested in character and character-driven play (and lots who weren't, which can be fun too, just not for a sustained campaign. Not for me, anyway). People like Boyd and Mel and Penny and Rowan and Sith and Gog and Ed and Troll Chris and Rose and Owen. I may not have stayed friends with all of them, but they all shaped the things that drive me in a game.

But the person I think influenced me the most is one I never played a roleplay game with, because he died before I was old enough. My Grandada was a wonderful, wonderful grandparent and responsible for my very first forays into roleplay, giving me  Steve Jackson/Ian Linvingstone book from his collection that I'm sorry to say I lost. I don't even remember the title: the quest was to retrieve a particular gem and I remember completing it by assuming I won all the fights (keeping track seemed too much effort: he died when I was 10 or 11 so I was younger when I was playing it). I was really excited when I got to the end: I thought I'd gone the wrong way and hadn't made notes and didn't really want to start again, but somehow I'd not only ended up in the right place but also managed to pick up the special black disc that was how to block out the light so you could actually get the ruby - I remember being really pleased because I'd almost not bothered getting the disc. If anyone knows the book, I'd love to try it again now I'm older... 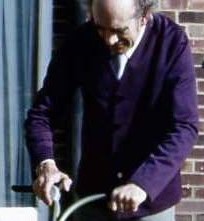 He was a teacher - English, as I recall, though my younger sister thought it was philosophy. He painted and played chess - I remember beating him, once, and assuming he let me win but everyone says it's more likely my child-naive play defeated him, because he didn't let people win. I'm not sure. He collected stamps and had amazing bushy eyebrows and would get our names muddled up - which we thought was hilarious, but apparently really upset him. He had a parrot called Chop, an African Grey that eventually Granny had to give away because he became too stressed and because he kept calling for Granny in Grandada's voice. Grandada was a huge Tolkein fan, and wrote to Tolkein to ask permission to put on a school play of, I think, The Hobbit, which I vaguely recall being told Tolkein attended and was impressed by, but that could be family legend. It's a good story, though. I recently found out he smoked, which was a bit illusion-shattering. He kept a big bowl of mints in the lounge and sometimes we could have one. Foxes Glacier Mints, mostly. We'd go up for New Year and the tree would still be up and it would always be taller than the room. He was unfailingly kind to us.

I was not surprised when I learnt he used to run D&D games, just bitterly disappointed to have missed out on sharing such with him. I hope he'd be pleased to see me so fond of the hobby. 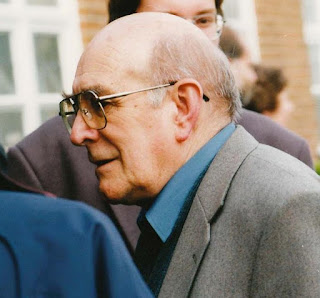 I miss him every day.